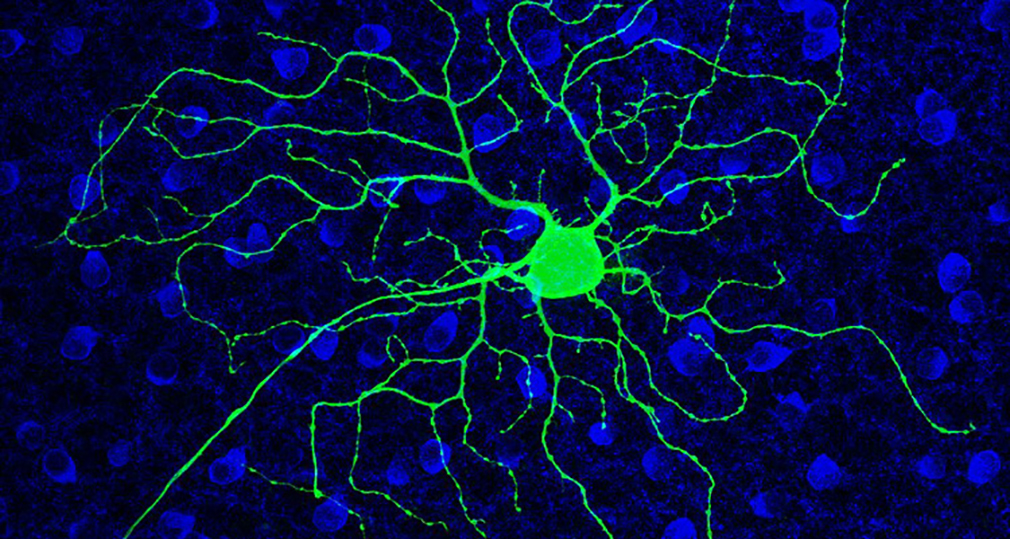 Researchers, led by UC Berkeley's Dr. Richard Kramer, a professor of molecular and cell biology and a member of the Vision Science Graduate Group, "have found that a drug once widely used to wean alcoholics off of drinking helps to improve sight in mice with retinal degeneration. The drug may revive sight in humans with the inherited disease retinitis pigmentosa (RP), and perhaps in other vision disorders, including age-related macular degeneration."

Co-authors of the study are Telias, Daniel Frozenfar, Benjamin Smith and Arjit Misra of UC Berkeley and Kevin Sit of UC Santa Barbara. Telias and Sit are co-first authors; Goard and Kramer are co-senior authors.

A mouse retinal ganglion cell (green), which becomes hyperactive in degenerative vision disorders. Other retinal cell types are labeled in blue. Hyperactivity interferes with the proper transfer of signals from the retina to the brain. Richard Kramer’s lab at UC Berkeley has discovered what causes hyperactivity and has identified drugs that interfere with the process, and by doing so, improve vision. (Image credit: Shubhash Yadav, Kramer lab)