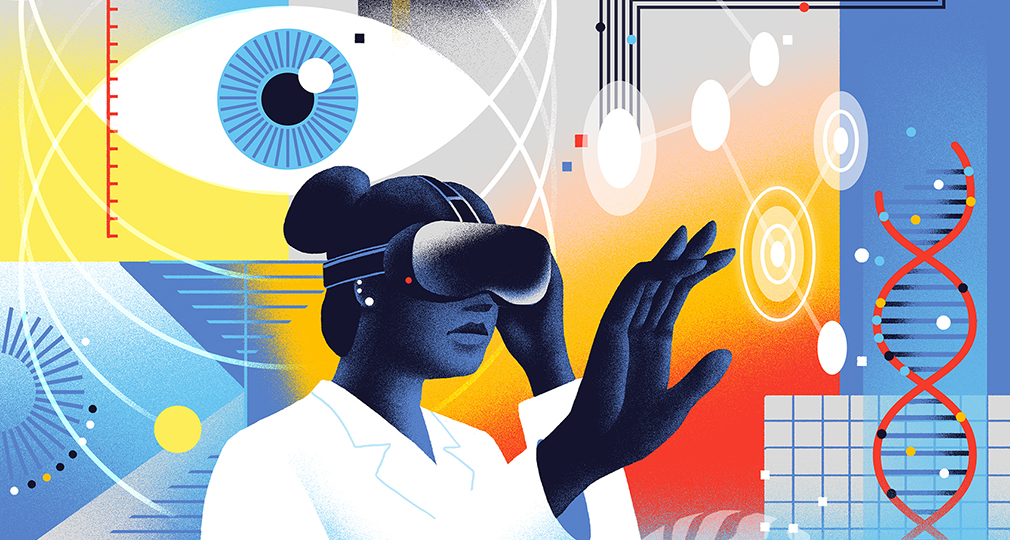 Many recent PhD’s from UC Berkeley’s Vision Science program have altered their presumed career trajectories from traditional academic or clinical ones to instead enter the high-tech industrial world. There are a few reasons for this trend, says Austin Roorda, professor and former chair of the Vision Science program. One important reason is that several distinct technological frontiers have advanced to the point where expert knowledge of the ins and outs of the visual system is a key to progress. Foremost among those frontiers are virtual reality and augmented reality.

Kavitha Ratnam, who completed her PhD at UC Berkeley’s Herbert Wertheim School of Optometry and Vision Science in 2017, expected to follow the academic path. She chose vision science because she loved biology and engineering and wanted to fuse them to make a positive impact. In her fourth year, Ratnam’s advisor, Roorda, whose lab focuses on how our visual systems create rich perceptual experience out of the two-dimensional images that enter our retinas, asked if she would be interested in an internship helping a company developing a perceptual testbed for virtual reality displays. She spent four months at Oculus Research (now Meta Reality Labs Research). During this time, she worked with both vision and optical scientists, several of whom were Berkeley Vision Science alumni or colleagues in the adaptive optics field. The experience was “as collaborative, rigorous, and gratifying as my research in academia,” Ratnam says. She completed her postdoc at Meta (formerly Facebook) Reality Labs Research investigating the visual quality of novel near-eye displays and developing a widefield-of-view retinal eye tracker.

Today, as a technical program manager at Meta Reality Labs, Ratnam works with a cross-functional team of optical scientists, engineers, perceptual scientists, product managers, and experience designers on the future of augmented reality.

“My vision science background gives me a unique perspective as to how engineering decisions will impact visual quality, which ultimately impacts the quality and immersiveness of users’ experiences,” Ratnam says. “With display technologies, typical engineering design processes need to be adjusted as these ultimately require perceptual, not engineering, optimizations. The eye is an imperfect optical system, so you don’t want to over-index on specifications where the eye is the bottleneck. Additionally, vision is a temporal process, which introduces a novel dimension to consider when designing a display. My vision science training enables me to drive these complex decisions with perceptual quality being the paramount goal.”

“As amazing as the technology emerging from VR and AR companies is, if their engineers don’t fully appreciate the complexity of the human visual system, the whole thing won’t come together,” says Roorda. “They need to consider how the eyes work together to form a multi-dimensional view of the world. How the eyes move, for example: always changing their positions, even when a person is focusing on a single small letter on the visual acuity chart. And when surveying a scene, a person’s eyes are constantly undergoing drifts and saccades, fast jerk motions redirecting gaze from one position to another. Those aren’t things engineers instinctively focus on, but a good VR or AR display will have to factor them in.”

Gene therapy is another burgeoning field where vision science has recently taken center stage. A robust understanding of human eyes and the visual system’s processes are key to companies racing to develop products. Cécile Fortuny, who got her Vision Science PhD from Berkeley in 2019, now works for Scribe Therapeutics, co-founded by UC Berkeley biochemist Jennifer Doudna, winner of the Nobel Prize for her work developing CRISPR technology.

Human eyes are “pseudo-immune privileged,” meaning that they have a milder immune response than other organs to the viral vectors used to deliver gene therapies, a quality that allows for study without extreme immune suppression. Eyes are also relatively isolated from other tissue, organs and blood circulation, which makes it safer to introduce genetic modifications without unintended consequences elsewhere. Additionally, compared to say the brain, liver, or other organs, eyes are easily accessible for quick and safe drug delivery. That we each have two separate eyes is helpful too; when researchers need a control, they can administer a drug to just one eye but take data from both.

At Scribe Therapeutics Fortuny is using the eye not only as a testbed for systematic treatments, sometimes addressing diseases beyond the visual system, but also for treating diseases of the eye itself. In 2017, the first FDA-approved gene therapy for a monogenic disorder targeted Leber congenital amaurosis, a retinal disease.

Unlike Ratnam, Fortuny knew she wanted to work in industry from the start. For several years in graduate school, she was a member (and director) of Beyond Academia, a Berkeley-based group that helps graduate students and postdocs in both the sciences and the liberal arts to explore career options beyond the academic track.

“There’s nothing wrong with an academic career. But it’s not the golden path for all PhDs,” says Fortuny. “Even when I first entered the PhD program, I was aware that I didn’t want to be a PI and have a lab and students under me. You can be a good scientist but not necessarily a good mentor, not necessarily a good fundraiser. I’ve always just wanted to do the science.”

Fortuny likes her job at Scribe and she appreciates the efficiency of industry, the emphasis on speed and results. But there are downsides too, she says. “Sometimes I miss the open, exploratory aspect of academia, where you can ask any question even if it’s not going to make a product down the line.” There is also less cross-institutional collaboration than you find in the academic world, where techniques and resources are often shared across research groups, she says.

One industry career option has long been open to vision scientists: working for optical companies that develop and manufacture contact lenses. The merging of optics and digital technology, however, has opened a new area of opportunity for vision scientists in the contact lens world. Eric Li, OD, PhD, went to work for Verily Life Sciences, an Alphabet/ Google company, after getting his PhD from the Vision Science program in 2016, and is now working on contact lenses with sensors and microchips integrated into them. These smart contact lenses will soon be able to monitor biometrics, such as blood sugar level for diabetics. More recently, the group began developing lenses that can automatically shift focal powers to accommodate presbyopia and enable on-demand, dynamic focus change in a comfortable hybrid lens.

After a year of teaching and clinical practice, Li realized his greater passion was for research and he returned to Berkeley to get a PhD in Vision Science. Though he had assumed then that he would seek an academic position after graduation, when the time came to look for a job, it wasn’t so straightforward. Finding a professorship would most likely have involved leaving the Bay Area. For family reasons that was not an option at the time. He looked to industry instead. “At the end of the day, it depends on the individual’s circumstances,” Li says. “I think I made the right decision.”

Sanam Mozaffari, who earned her PhD from the Vision Science program in 2021, is now an opto-mechanical engineer at X Development (formerly Google X), Alphabet’s “moonshot lab,” where she works on a wireless optical communication system called Project Taara. The system uses beams of light to transmit high-speed data through free space. Mozaffari compares the project’s engineering challenge to that of ocular imaging. “In both cases, you have to send a clear image through a turbulent media,” she says. “In the eye it’s the lens and the vitreous and in optical communication its atmospheric turbulence.” When she was in Roorda’s lab, Mozaffari applied adaptive optics to correct for distortions. At X, she applies a different set of correctives, but in both cases the objective is the same: to preserve the fidelity of the signal sent safely at the lowest energy cost. “It’s a completely different application,” Mozaffari says, “but the science and the engineering problems that we’re solving are very similar.”

Mozaffari chose the Vision Science program because both engineering and eyes fascinate her. She especially appreciated the diversity of students, professors, and subjects of study in the program. At any one time, she remembers, every student in the program might be focusing on a different thing. “Some were doing anatomy-based research and others optics-based research, and others were putting a bit of one together with some of something else. But everyone was sharing and collaborating. That’s what makes vision science thrive.”

That cooperative, multi-disciplinary approach has served Mozaffari well at X, where she works on a small team that is always considering the many aspects of their project from multiple points of view. “When you have expertise in so many different areas of optical systems, and when these all come together, you really see the benefits,” she says.

“As amazing as the technology emerging from VR and AR companies is, if their engineers don’t fully appreciate the complexity of the human visual system, the whole thing won’t come together.”

“I was definitely on the professor track,” says Mozaffari. “But I was naïve about what that meant. Yes, it’s liberating to choose your own research questions, but with that comes a lot of responsibility, a lot of writing, a lot of fundraising in addition to just the engineering. As it turns out, just focusing on engineering is my preference.”

When he first noticed a growing number of his students heading toward industry, Roorda admits he worried a little. “I always had the mindset that the ultimate achievement for my PhD students was to become a professor like me. But I’ve totally changed my thinking on that. For one thing, the opportunities for industry-based careers in vision science pay very well. At least as important, our graduates can work effectively and have an impact, they can develop products that help people. All in all, it’s another enriching environment.”

Today, Roorda actively cultivates relationships between his students and industry partners. Three years ago, along with his colleague Marty Banks, he co-founded the Center for Innovation in Vision and Optics (CIVO), an industrial membership organization whose mission is “to promote the development, use, and dissemination of innovative display, graphics, and optical technology for the healthy and diseased eye.” For a membership fee, companies get a working relationship with Vision Science professors and doctoral students.

“The benefits go both ways. Everyone gains from the associations,” says Roorda.

Fortuny agrees. “It’s part of the crossflow of people, knowledge, and technology moving between the academic and industrial realms,” she says. “There isn’t just one path anymore. Everything is flexible, blurry, dynamic, and crossing over in a confusing but beautiful way. And I think that’s great.